Crypto brief: Litecoin (LTC) is showing some signs of life

Previously, Litecoin’s price had started trading further lower towards $75.00 against the US dollar.  However, the coin started showing some signs of life and is currently recovering above the $77.00. Moreover, due to the coin’s increased adoption, its price is expected to skyrocket again.

Litecoin’s price declined below the previous lows and traded close to $75.00. The highlighted crucial bearish trend line was breached with resistance at $77.60 on the hourly chart of the LTC/USD pair. As such, the coin may continue to experience more gains towards the key resistance at $80.00 in the near term. 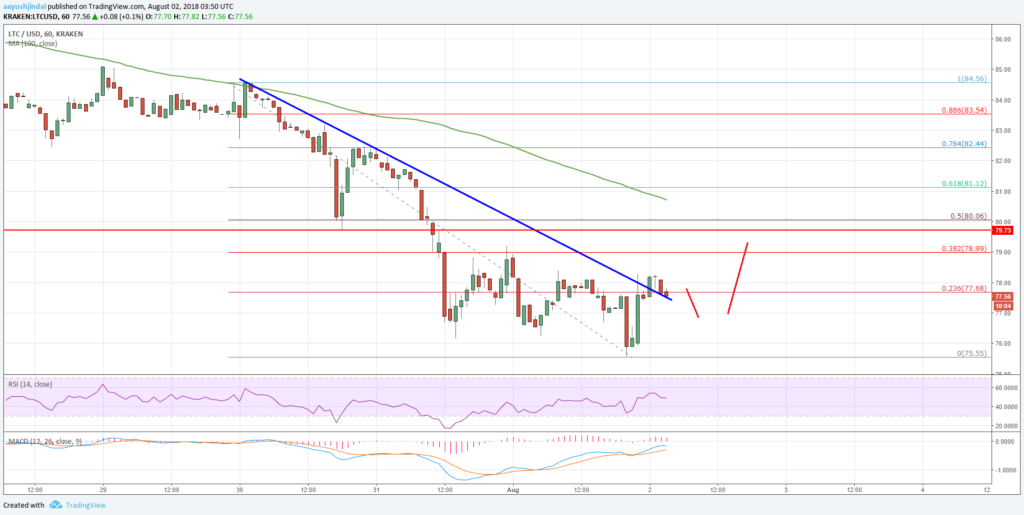 The first quarter and a better part of the second quarter of 2018 have been terrible for the coin. When its value started reducing in January, many thought it was just a normal retracement because of the massive leap that the cryptocurrency had made in December 2017. Additionally, the coin continued to experience dramatic declines that prompted traders to start selling it at a loss.

However, considering the increased adoption and positive developments surrounding the platform. The coin is expected to show some signs of life very soon and show dramatic increases. One of these reasons is because the coin has become oversold, thus its value is expected to rebound soon.

Additionally, itBit was given a green light to enlist Litecoin. This is an exchange platform regulated by the NYDFS to trade digital currencies in the United States. As such, since it is regulated, it may attract lots of investors and interests from traders, thus increasing litecoin’s price.

Analysts such as Mati Greenspan of eToro have argued that the coin is trading at a massive discount to what it should be worth. This is due to its resistance to 51% attacks and its structure as a compliment of Bitcoin. As such, the platform can tether itself to the flagship cryptocurrency by adopting innovations.

Do you agree with Greenspan that litecoin is trading at a massive discount to what it should be worth?

Do you want to invest in bitco..