The Litecoin founder, Charlie Lee revealed that he has plans to push Litecoin’s price above $400. Additionally, he claimed that soon the coin’s price will break its all-time high price record and even reach bitcoin’s price.

The coin is becoming more and more important with new developments. The interest in litecoin (LTC) has risen and it is going up and up. Through a twitter conversation with some traders, Charlie Lee emphasized that the platform’s mission is to advance Litecoin for the good of society. Additionally, Lee twitted that he has plans to push Litecoin’s price above $400 so that people will stop questioning the platform.

Recently, the coin’s price declined and broke the $88.00 and $86.00 support levels against the US dollar. A bullish trend line was breached with support at $86.00 on the hourly chart of the pair. Currently, the coin’s price is trading at $83.38. However, according to the chart, the price was under a lot of pressure below $90.00 and declined below the 50% Fib retracement level of the last wave from the $75.38 swing low to $94.56 high. 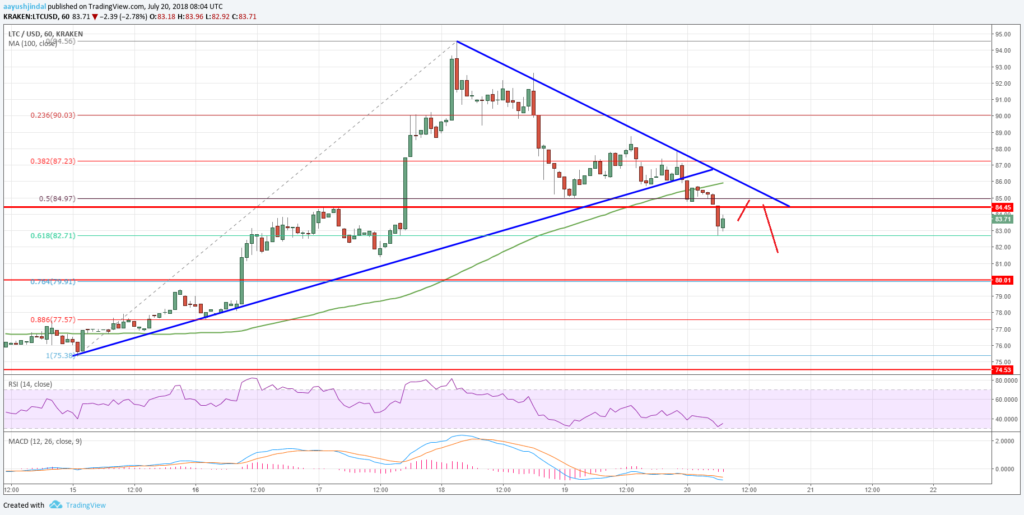 Moreover, the price is currently testing the 61.8% Fib retracement level of the last wave from the $75.38 swing low to $94.56 high. In case of a break below the $83 support, the coin’s price may extend a slide towards $80. However, on the upper side, if the price moves higher, the broken support at $84.50 may act as a strong resistance.

Despite litecoin’s defeat on the global coin ranking list, it is evident that the platform is working on a great comeback, as we can witness an increased activity in the marketing strategy of Charlie Lee and his team. This team is going for mass adoption of the platform.

Do you believe Charlie Lee’s promise of a $400 litecoin price?

Bitcoin is expected to cross $..

Elon Musk changes his bio to “Former CEO of Dogecoin,” and the price is responding