Litecoin’s price dropped below $78.00 during the early Asian hours before it recovered to $78.88. this decline took place amid negative claims by Charlie Lee that Bancor is not really decentralized. Currently, the coin’s price is accelerating declines and could revisit the $72 support.

The 6th largest digital currency in the market has dropped 2% since the start of the day amid negative claims by Charlie Lee. The cryptocurrency has been hard hit by news of the security breach on Bancor, decentralized cryptocurrency exchange. According to Charlie Lee, the exchange was hacked, and that it has the ability to steal coins out of their own smart contracts. As such, an exchange is not decentralized if customer funds can be lost or frozen. 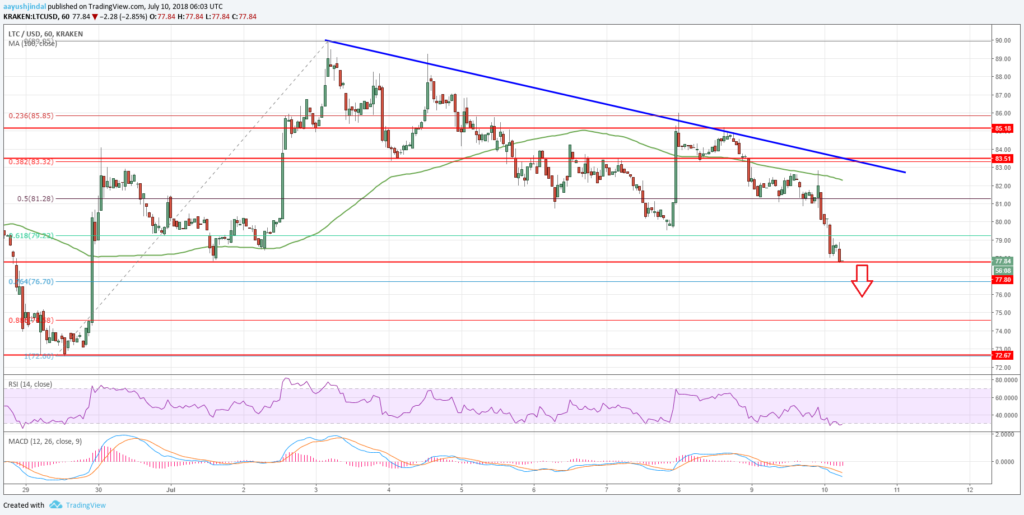 A break below the $77.50 support may lead the price to test the 76.4% Fib retracement level. A decline below this may well lead to $72 support swing. The LTC.USD pair may undergo a base building process for a few weeks, after which a bullish trend may take over.

Lack of frequent mass adoption has led many critics to cast doubts on the future of digital currencies. Nonetheless, some researchers from the imperial college of London predicted that digital currencies will be used in paying for goods and services in the next ten years.  However, with the current market conditions, it remains to be seen whether these predictions will come true.

Do you think lack of mass adoption is the main cause of the current bearish markets?

Elon Musk changes his bio to “Former CEO of Dogecoin,” and the price is responding

Litecoin: A short introduction including its differences with Bitcoin